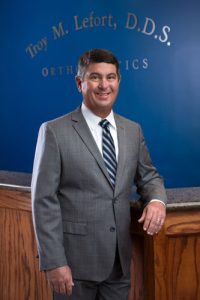 Dr. Troy M. Lefort was born and raised in Cut Off, Louisiana. He completed his undergraduate education in biology at Louisiana Tech University, and he received his Doctor of Dental Surgery (DDS) from the LSU School of Dentistry in New Orleans in 2000. Dr. Lefort then completed a post-doctoral residency in advanced general dentistry at LSU and entered into family dentistry in DeRidder and Leesville, Louisiana, for two years before starting an orthodontic residency at Columbia University in New York. In June 2005, he completed his two year post-doctorate training in orthodontics. Dr. Lefort and his wife, Jerry, moved to Lake Charles shortly after graduation, and he began his private practice. To stay abreast of the latest advancements in orthodontics, Dr. Lefort maintains active memberships with the American Association of Orthodontists®, the American Dental Association®, the Louisiana Dental Association, the Southwestern Society of Orthodontists and the Louisiana Association of Orthodontists. He looks forward to creating your healthy, beautiful smile.

Dr. Lefort is married to Jerry Dale Lefort. The Leforts have two children: a son, Jack, and a daughter, Alayna. When Dr. Lefort is not bending wires and straightening teeth, he enjoys the outdoors, fishing, hunting and being involved in his children’s sports and activities.